Most people who ride their bike six miles to work might come into the office out of breath. But for Tim Reese, the 6-mile ride from home to FI$Cal feels like taking little more than a cruise around the block.

That’s because Tim is used to riding farther – much farther. Tim, the client communications manager in External Affairs, plans to ride five double centuries this year. That’s a 200-mile bicycle ride up and down hills, bumpy roads and through all kinds of weather.

“It’s a chance to clear my head, and relax after a stressful day or get my thoughts together before I get to work,” he says of riding to work. “Oftentimes I’ll be riding on the bike trail and pass under the Business 80 freeway packed with cars bumper to bumper and relish the fact that I’m cruising along on a wide open bike trail with deer grazing in the nearby fields and hawks soaring overhead.” 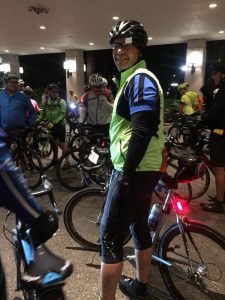 “The great thing about long-distance biking is you experience so many things,” he says. “Often you are on the bike when the sun comes up and then when it goes down. At Solvang we left at 5:15 a.m. and we saw a nice sunrise.”

Tim first got the bug to get on a bike as an adult when he was 40 and living in upstate New York, where he was running and swimming. Some of his friends were triathletes.

He tried a couple of smaller triathlons, then decided to tackle a big one – the Iron Man. That calls for swimming 2.4 miles, riding a bike 112 miles, then running a full 26-mile marathon. He now has five Iron Man triathlons to his credit. His fastest came in Coeur d’Alene, Idaho, in 2005, when he completed the grueling event in 11 hours, 54 minutes.

That was the year Tim also completed his first double century bike ride. He did five doubles in 2007, and has completed the Davis Double four times and the Devil Mountain Double from San Ramon five times.

During these extremely long rides, Tim has seen his share of cringeworthy things.

“One time, I remember biking along a road near Fresno on the Bass Lake Double in the fall and there were small tarantulas all over the road for about ten miles,” he recalls. “Another time, we were descending off Mount Hamilton (near San Jose) in the dark and there were lots of snakes on the road and with the bicycle lights you couldn’t see them until you were almost on top of them. I think I ran over at least one.”

While running over snakes at night on hours-long rides may not be for everyone, the chance to pedal to work appeals to many. May is Bike Month, and state workers are encouraged to join in.

Sacramento’s crown jewel – the American River Parkway – contains a long, vehicle-free route for many bike riders. Tim uses the parkway during part of his ride to FI$Cal, getting off near Canterbury Road. He says that, after living in New York and southern Indiana, Sacramento is probably the most bike-friendly of the three, and is improving all the time.

Tim has volunteered with Sacramento Area Bicycle Advocates, which works to improve the bike-riding experience for everyone in the region. 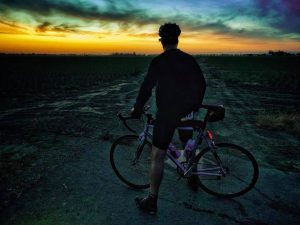