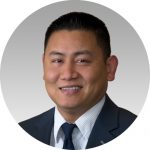 Peter Vu joined FI$Cal as the Legal Counsel in May 2019. In this position, he consults with and advises Executive staff, Deputy Directors, and the Human Resources Office on complex and sensitive administrative and legal matters affecting the department’s operations. Prior to joining FI$Cal, Peter worked as a litigation attorney for the California Department of Transportation, defending the state in tort and employment litigation. While at CALTRANS, Peter obtained a jury verdict in favor of the state as co-chair of a lengthy case in which the plaintiff claimed dangerous conditions on public property and sought over 19 million in damages. Prior to starting his state career, Peter worked in the private sector as an associate attorney practicing employment, business, commercial and legal/medical malpractice law.

Peter holds a Bachelor of Arts degree in Communications and Political Science from the University of California, Davis. He received his Juris Doctorate, and Straus Institute for Dispute Resolution Certificate, from Pepperdine University.