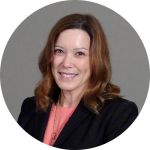 Jennifer Maguire was appointed Director of the Department of FISCal (FI$Cal) on October 18, 2022.

She has worked for the state of California for over 25 years, and over the past 10 years has worked at FI$Cal, first as the Deputy Director of the Administrative Services Division and most recently as Chief Deputy Director. During this time, Jennifer led the administrative transition of FI$Cal from a project to a department. She also created the department’s accounting shop from the ground up, and implemented the department’s telework program.

Jennifer holds a Bachelor of Science degree in Sociology with a concentration in Research Methodology from California State University, Sacramento.